Article first published in the November 2017 issue of the Laurel Messenger, reprinted here as a companion to our apple video features.

The versatility of apples made them a very important food source for most early Somerset County families. They could be eaten fresh, made into sauce, pies, apple dumplings, boiled into apple butter, and squeezed into cider.  Cider could be drunk fresh, made into hard cider with the addition of sugar, yeast, and fermentation, or allowed to turn into vinegar. Vinegar had many uses for flavoring and turning cucumbers into pickles.  Whatever their use, many of the products made from apples did not require refrigeration and didn’t readily spoil adding to their importance in providing food stuffs to sustain the family through the winter months when fresh fruits and vegetables were unattainable.

Cider and apple butter was and still are commonplace foodways articles on many Somerset County tables. Diaries and journals mention the making of cider and apple butter. Cider presses popped up around the countryside, usually within a day’s wagon-ride of the farms to process the apples into cider. Many of the early presses were large devices, utilizing the shear weight of wooden beams to press the cider from the ground-up apples. Levers or a wooden hand-turned wooden screws often provided the lifting or pressing mechanisms.  Grinders were often horse powered or attached to engines. Eventually companies began to manufacture portable cider presses that contained both the grinder and a pressing screw for squeezing the juice from the pulp and marketed them toward farmers. These usually sufficed for a single farm operation and eliminated having to haul the apples to another location.

The Jacob Emerick Cider Press at the Somerset Historical Center is an excellent surviving example of an early Somerset County cider press and only one of a few that still exist in Pennsylvania. It utilized the weight of the main pressing beam that was 33 feet in length and 32 inches square to press the apples. A lever type mechanism, similar to a playground see-saw was used to lift the main pressing beam. Other types of cider presses utilized large wooden screws about a foot in diameter that could be turned by hand to lift the beam to do the pressing.  The Society has a rare tap and die that was used to make 12 inch-diameter threaded screws and nuts for constructing cider presses of this type.  Eventually more efficient commercial operations using hydraulic rams and iron screws made these early operations obsolete.

The cider made at these cottage-craft presses would be taken back to the farm for beverages, turned into vinegar, or boiled down in large copper kettles, with apple sauce and spices added to make apple butter. Kettles don’t have a large heating surface, so it took many hours of boiling to reduce the cider into “boiled-down” cider.  Boiled-down cider was also an ingredient used to make mince meat pie filling.  It also took considerable time to peel, core, and snitz the apples for sauce. “Schnitzing bees” made the job go faster and easier and added a social gathering to the process. Mechanical apple peelers were used to speed up the peeling process. Early peelers were wooden and later ones were made of cast-iron.

Sometimes sugar was added to the apple butter if the apples were sour, but most apple butter today is made without added sugar.  Spices such as cinnamon, cloves, and allspice were added just as it reached the proper consistency.  The apple butter was boiled to a very thick consistency and constantly stirred to prevent scorching. It was packed into stoneware crocks with paper or cloth tied with cord-string around the top as a cover.  The thick concentration and high sugar content helped to preserve the apple butter without refrigeration. When I was very young, I remember my neighbor in Stoystown, Flo Lingenfelter, showing me some apple butter that had been stored and forgotten in her basement for dozens of years. Upon untying the strings that held the cloth in place on the one-gallon crock, the apple butter had crystalized. When we added some warm water it appeared to have reconstituted back into apple butter quite well. No, I wasn’t quite brave enough to sample 50 year old apple butter!

*See how cider is made and learn about our historical press in our "Everything Apple" video!*

One of the most famous and oldest cider and apple butter operations in the County is the Beachey Apple Butter factory in Springs, PA.  It originated as the Niverton Cider mill and apple butter factory operated by Christian B. Zook.  Zook moved his mill at least once in the Niverton area of Somerset County.  Later, in 1928, Dan S. Kinsinger bought Zook’s farm and continued the operation.  When the old gear press and other equipment was worn out, He asked his customers for advice on whether or not to continue. They encouraged him to remodel and he finished the rebuild in 1948.  The farm again changed hands in 1950 when Albert U. Yoder bought the farm and mill for Bennie A. Yoder.  In 1954, Sam Beachy and sons bought the cider mill and leased the site where the building stood. In 1965, Beachy’s built an addition to their Niverton shop and moved the equipment from the old mill to their own building a short distance away.  This business in still going strong today, although Beachey’s sold the business to Willis Sommers, the current owner since 1995. Willis worked for Menno Beachey for 14 years prior to purchasing the business. His whole family is involved in the business including his wife Marlene, son Wesley, and daughters Marita and Monica. They process their own apples into cider and apple butter, but also do custom work for a variety of orchards, stores, and individuals.

Apples go through the washer and then are separated into crates or sent up the conveyor to the grinder.

The process at the Beachy Factory involves dumping the apples into a chute where they travel on a conveyor to be washed and leaves are removed. Several bushels are redirected from the conveyor and taken to be cooked for the sauce. Once cooked a machine extracts the seeds and skins in preparation to be added to the boiled down cider. The remainder of the apples travel up the conveyor to a grinder near the ceiling of the building.  Once ground into very small chunks, they drop into a box suspended over the pressing table. Opening the bottom of the box allows the apple chunks to fall into a mold that is lined with cloth. When filled, the corners of the cloth are folded over the top of the apples to make a flat bag filled with pulp called a “cheese.” A slatted sheet is placed between the cheese layers.  When several cheeses, up to 13 in number, have been stacked, they are wheeled under the hydraulic press where 25 tons of pressure squeezes the cider out of the cheeses. The cider drains into a tank below. The cider can be transferred into another tank for filling into jugs or it can be pumped into the large stainless-steel steam kettles where it is boiled down, applesauce added, and further boiled to the proper consistency. About 53 bushels of apples can be done per batch. Spices are added at the very end of the operation.  When finished boiling to the proper consistency, the scalding-hot apple butter is piped into a stainless steel-lined box. From this “hot” box, Sommers’ wife and daughters dispense the apple butter into jars and screw on a one-piece lid for sealing. The boiling process takes only 1 to 1 ½ hours to complete. One bushel of apples yields about 3 ½ quarts of apple butter. 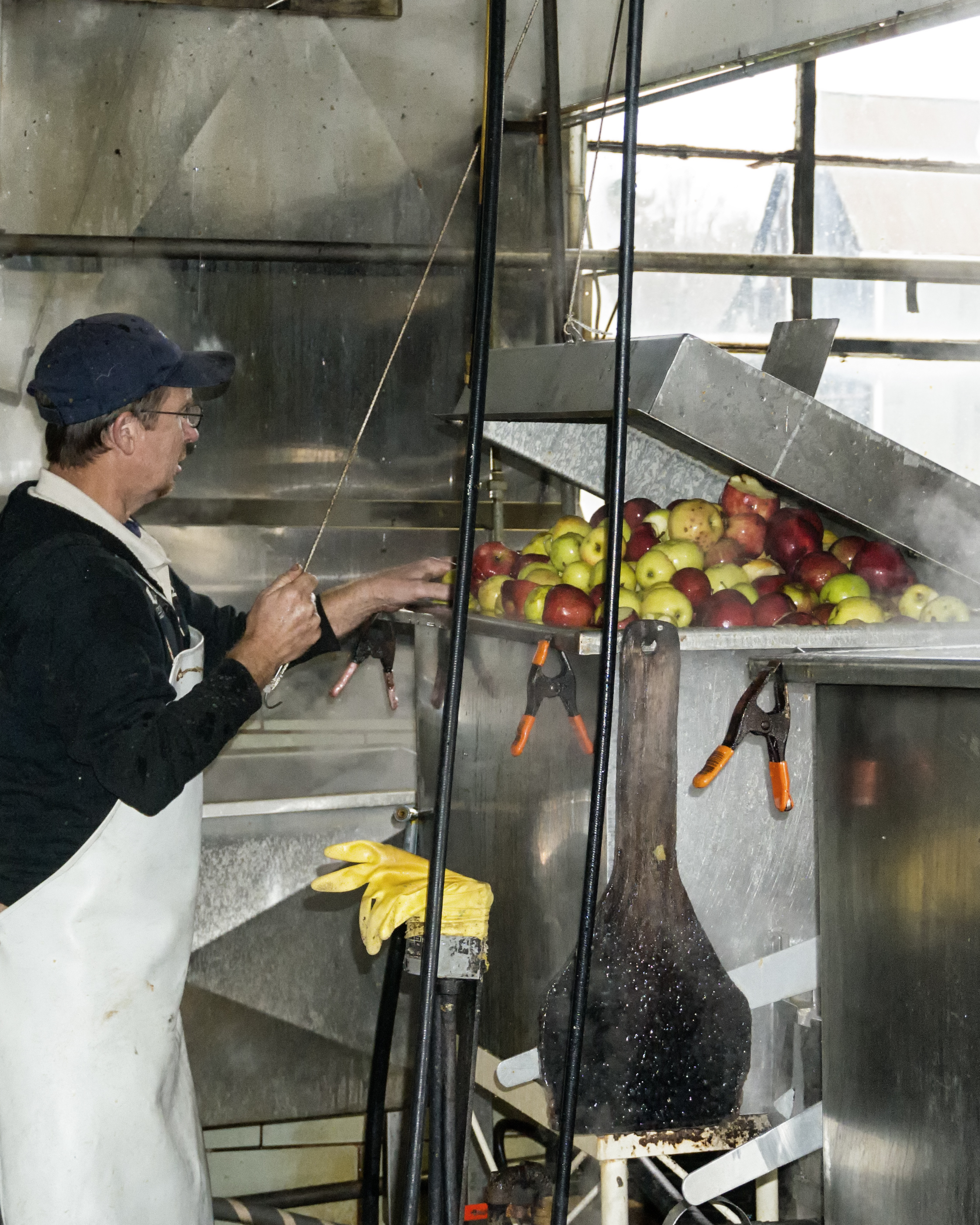 Steam cooking apples into apple sauce. The seeds and skins are screened out and the sauce is pumped into the cooking kettles.

The squeezed apple pieces, or pomace, is very dry.  When I was growing up, we always called the squeezed apples “pummies.” I guess that was our vernacular term for pomace. They have no flavor and are usually discarded into the wild for turkey and deer to enjoy the seeds and pulp. 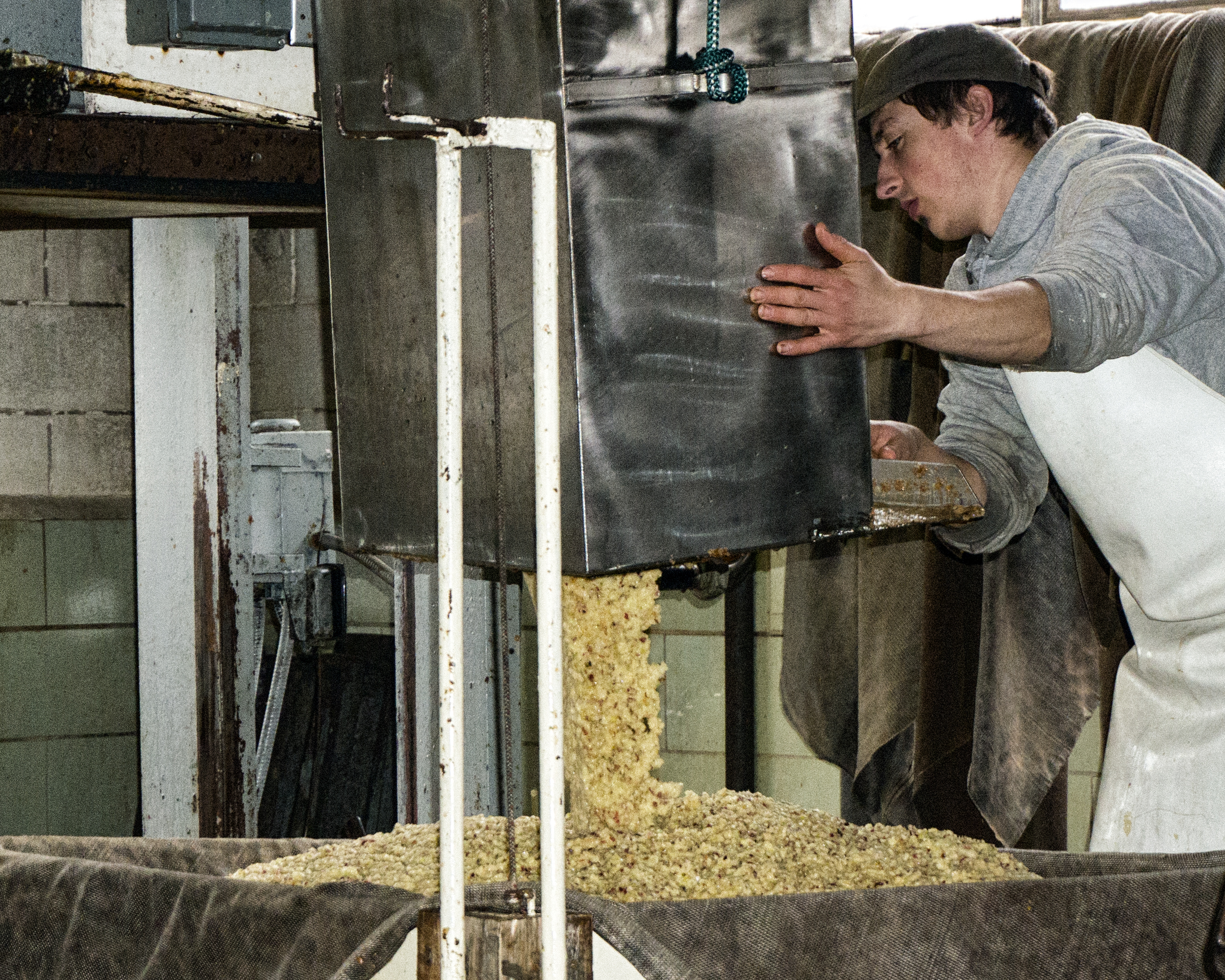 Filling the press cheeses with ground apples, one on top of the other.

A visit to the Beachy apple butter factory is a treat for those who wish enjoy fall foliage drives and a unique old-timey experience. My family has been taking apples there for over 45 years to make the apple butter that my mother Hazel sells during Mountain Craft Days. We used to scrounge apples from local farm orchards, laboriously picking the apples from the trees and those that had dropped to the ground, dumping them into 50 pound feed sacks and piling them high over the cab of the pick-up truck for the trip to Springs.  My brother Clyde did most of the work in the early years and my brother Kyle and I have taken on the task in the past dozen years or so. We now buy apples from a Bedford County orchard in bulk instead of using farm-orchard apples.  Few farms have orchards anymore and the quality of the apples doesn’t meet today’s rigid standards for food production. After processing, the scalding-hot apple butter is immediately put into glass jars. Their processing must meet today’s safe food handling practices. The older method of using unlined copper kettles, open air boiling, and home canning doesn’t meet the required standards for retail sales. 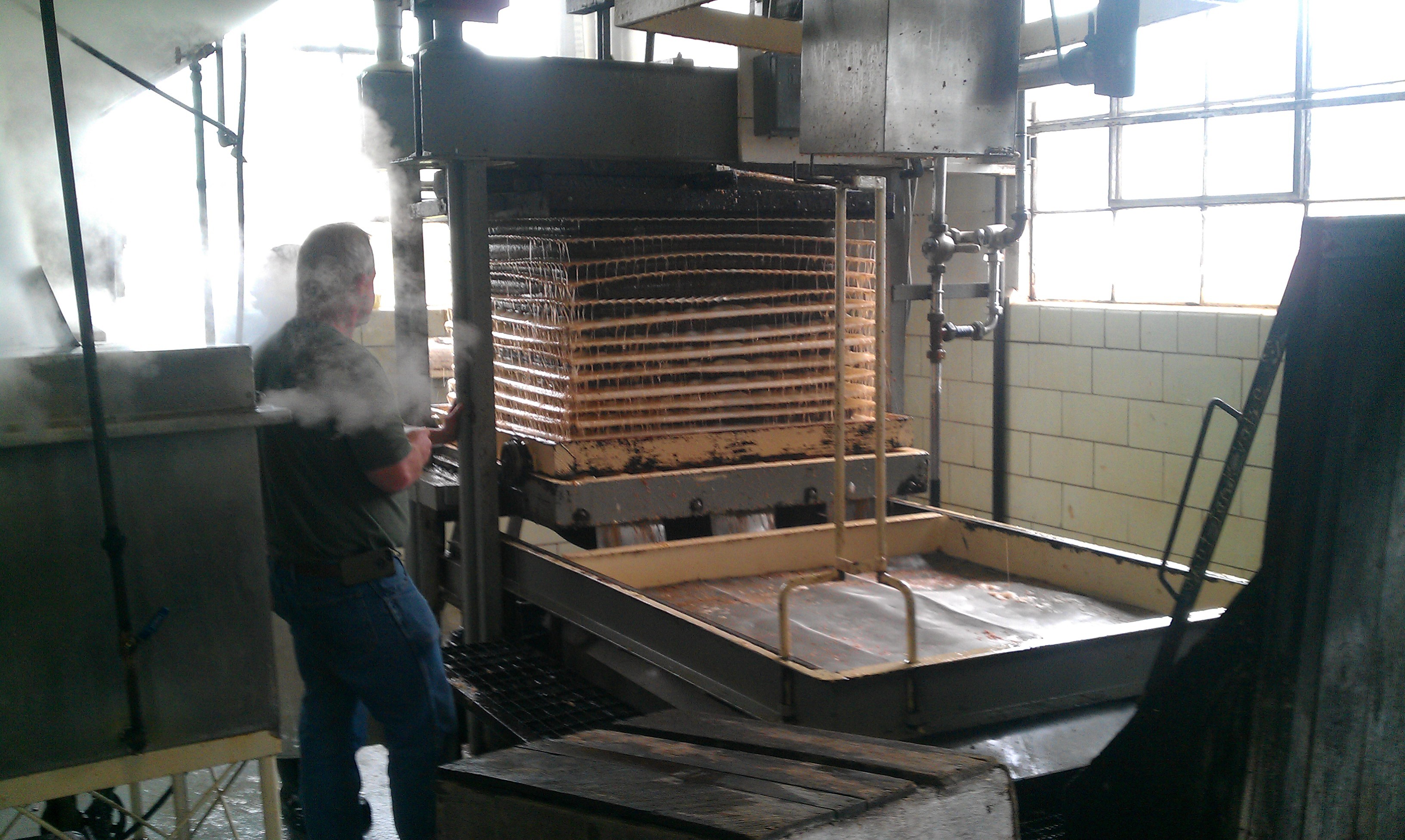 The stack of cheeses is slid under the press where 25 tons of force squeezes out the cider.

A trip to the Springs area in the fall is a wonderful experience. There are lots of Mennonite/Amish country stores close by with roadside stands of pumpkins, baked goods, and other fall fare available for sale during apple butter season. The region explodes with nostalgic views of fall activities where corn and grain shocks can still be seen drying in the fields, horse drawn wagons, and farm implements still in use.  Use caution when driving in that area. It is common to find young Amish children walking to school, horse drawn equipment, and slow moving vehicles on the roadways. 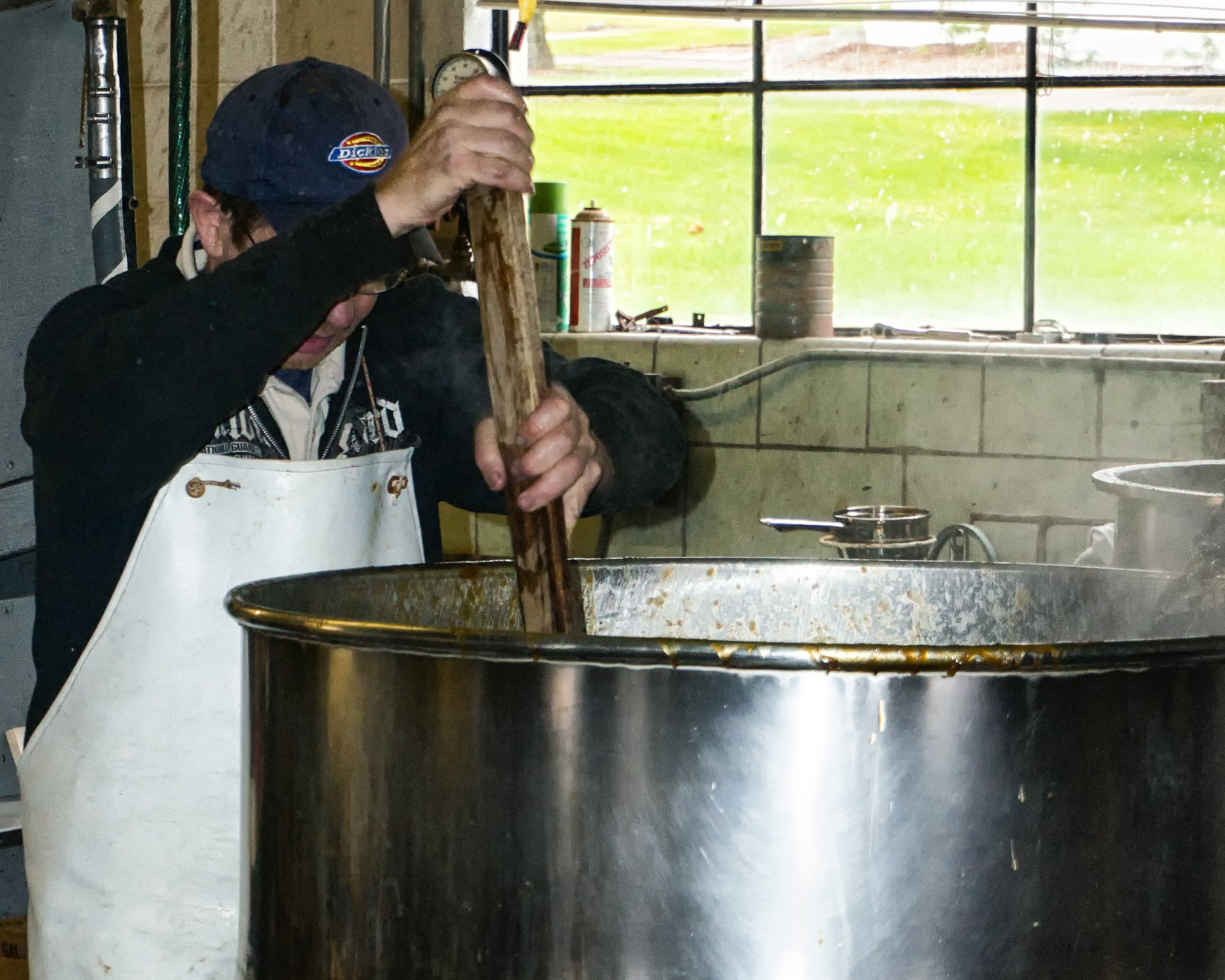 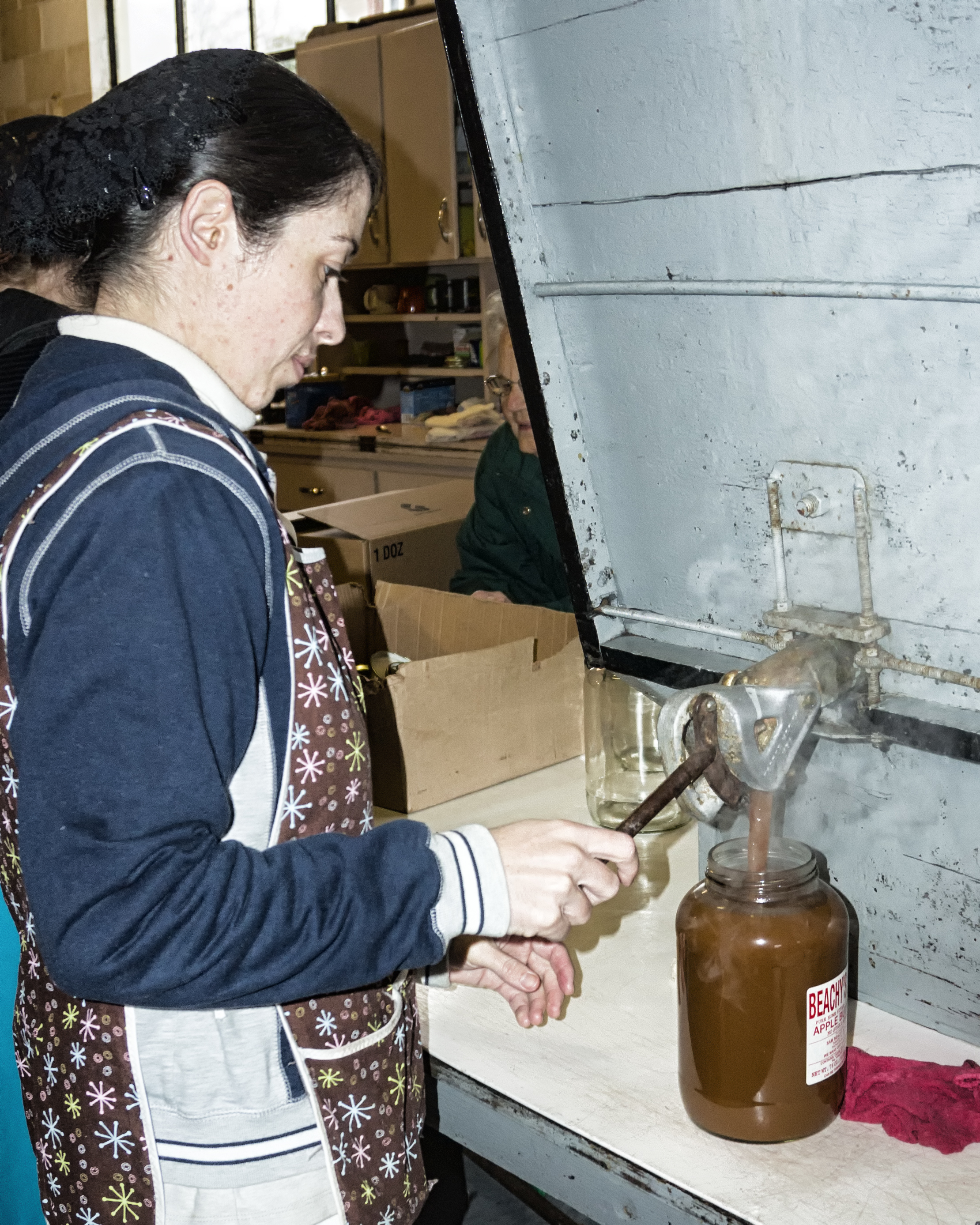 Fresh cider and applesauce are cooked together to make the apple butter. Finished butter is put in jars for distribution and sale.

Pure apple butter without any added sugar is available for purchase anytime in the Museum Shop at the Somerset Historical Center. It is available in ½ pints, pints, and quarts.  It makes a terrific gift item, especially for someone from out of the area that never has experienced real old fashioned apple butter. It has a totally different taste from that “other” commercial apple butter sold in the big-name grocery stores!